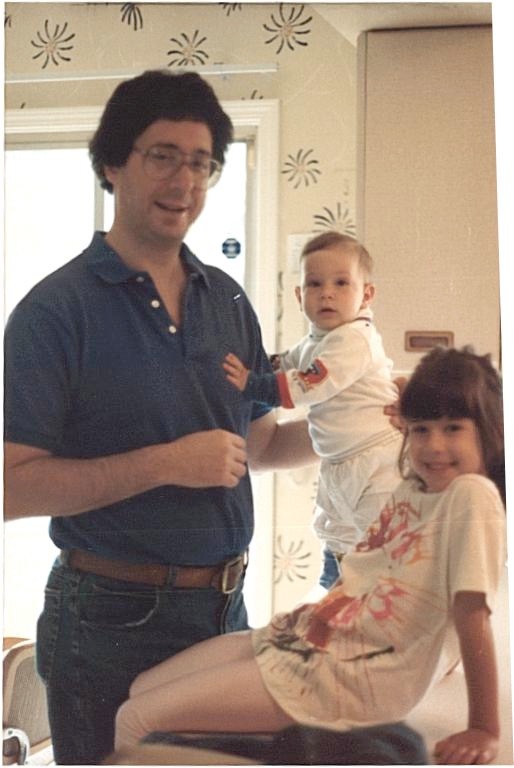 I’d like to wish the wonderful father of my children—my husband—a well-deserved Happy Father’s Day. He had his own favorite books that he read to the kids: Babar the Elephant, Good Night Moon, Go, Dog, Go!, Is it Bedtime? (a.k.a. the Daddy Foo-Foo book), Five Little Monkeys Jumping on the Bed, the Berenstain Bears series, and many others. And then, of course, who can forget the delightful Tommy-and-Robby stories (inspired by his childhood) that he created and recounted at bedtime? In honor of Rob and all the other loving and supportive fathers out there, I am rerunning an earlier post (with some changes) I wrote about my father. Enjoy the holiday!

In previous posts, I have written about the importance of telling our story to our children and grandchildren. Researchers at Emory University found that children who knew the most about their family’s background—the positive events and how they overcame the negative ones—had the highest self-esteem and a greater sense they could control their lives. We can reminisce, look at photos together, share journals and scrapbooks. For me, one of the benefits of writing a blog is preserving my thoughts for my future generations. In that vein, I’d like to share some thoughts about my father.

This past February marked 41 years since my father passed away. At the time of his death, he was a father of three and a grandfather of six. I wish he knew that all these years later, his children and grandchildren (two of whom are grandparents, themselves) would hold vivid and treasured memories of him close to their hearts. Through his words and actions, he set a standard that we tried to emulate in key areas of our lives. Probably that was his hope; he made all the small moments with each of us count.

All those small moments added up to so many memories swirling in my mind. Living in an urban area, he raised luscious tomatoes in our backyard, tenderly nurturing them and transplanting them into the most advantageous spots. In the winter, he flooded the same backyard to create an ice-rink for my niece and me. When one of his grandchildren inadvertently locked herself in the bathroom, he scrambled up a ladder and climbed into the high second-floor bathroom window to free her. He paid his bills promptly and only promised what he could deliver—he believed in keeping his reputation and word pristine. He never ran an errand without offering one of his grandkids the chance to accompany him and get some one-on-one time. He was always prepared—for the good and the not-so-good: his pocket could produce change for the Good Humor man, sticks of gum, a strong rubber band and a fresh handkerchief.

So many memories and anecdotes come to mind…let me choose one more that exemplified the man. In January of 1967, the largest single snowfall in Chicago history blanketed—and crippled— the city. At that time, I was in high school (and my dad in his sixties) and had a weekend job downtown at the Art Institute. Getting there required me to take a bus and then the El (elevated subway), as well as do some walking. However, when Saturday dawned—the day after 23 inches of snow covered Chicago— I was sure that no one expected me to show up at work. I was wrong…my dad expected me to.

Somehow, in this pre-Google world, my dad checked out that some public transportation was still running, and that I would be able to make the trek to the Art Institute. I was left with no choice, but I was not left alone. Clearly it was important to him that I honor my commitments—if possible— but his loving, protective side led him to make the trip with me to ensure that I arrived safely at my destination. He would not ask me to do what he would not. His sense of fun and curiosity turned our commute into a mini-adventure.

Unfortunately, my children never met him, which is one reason why it is important to me to pass on these family stories and honor my father’s legacy. And I think it’s clear why I named my beautiful son, Max, after my father.

Think about the family narrative that you want to create and share with your children, grandchildren and great-grandchildren.