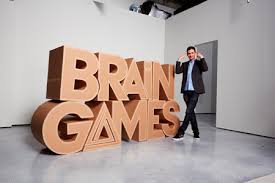 Although I typically write about books and book-related topics, I want to highlight a television series that I recently discovered. After all, mental stimulation is the reason we own a tv, right?

Have you seen the Emmy-nominated television series, Brain Games? National Geographic’s fun, interactive show invites the viewer to take part in various experiments—brain games—that illustrate an interesting point about the human brain and challenge your current perceptions. The disarming and intellectually curious host, Jason Silva, is joined by various experts in cognitive science, neuroscience and psychology who discuss and explore our brains’ capabilities. The third season started July 14 with ten new episodes. So far, I’ve watched ones focusing on compassion, addiction, language and risk. Next up is Battle of the Sexes, which I definitely want to see. You can also purchase DVDs of past episodes or view videos on-line.

Actually, it would be more accurate to say that I discovered the National Geographic Channel. I mean, I kind of… sorta… knew that it existed (probably from channel surfing), but I don’t think I ever really watched anything on it. So, after getting hooked on Brain Games, my husband and I watched a couple of episodes of Going Deep with comedian, David Rees. Rees takes mundane subjects—recent ones included making ice cubes and tying your shoelaces— and explores them in such depth as to render them fascinating. Yes, this is geeky, but Rees approaches it all with his quirky, edgy sense of humor, which you may or may not appreciate. 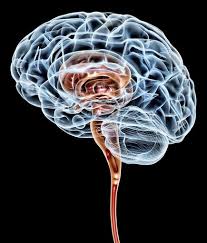 Now I’m planning to check out None of the Above this Sunday morning. Host Tim Shaw takes an irreverent look at science and engineering while conducting jaw-dropping experiments and challenging you to predict the results. I’ve never been much of a science/engineering person, but I’m sure NGeo can make this field entertaining and accessible even for me.

Given the success of Brain Games, NGeo has developed three upcoming shows: Mind Over Masses, which explores interesting ways to change human behavior; You Can’t Lick Your Elbow, which examines the human body; Mapology, which uncovers unusual aspects of our world.

These are all reality shows that you can admit to watching…and no one will judge you.

2 Responses to “Entertain Your Brain”